Senior author, Peter Turkeltaub, M.D., Ph.D., said, “Over the past decade, researchers have increasingly suggested that the right hemisphere interferes with good recovery of language after left hemisphere strokes. Our results suggest the opposite – that right hemisphere compensation improves recovery.”

Speech and language loss, known as aphasia, occurs in one-third of stroke patients and they never fully regain it back.

Furthermore, those with recovered speech areas had a larger right hemisphere. Dr. Turkeltaub added, “This indicates growth in these brain areas that relates to better speech production after a stroke.”

The type of aphasia a person has can determine the symptoms they experience. Common symptoms of aphasia include: 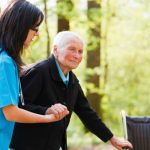 If brain damage caused by stroke is mild, language recovery may be possible through speech and language therapy. Therapy is most effective when administered early on – research has supported the idea that speech therapy should occur soon after the brain injury has occurred.

Therapy may also be effective in group settings, where communication skills can be practiced in a safe environment free of judgment.  Also, speech therapy may involve the use of computers to assist in the re-learning of verbs and word sounds.

Lastly, although there are no proven medications that can restore language in aphasia, they continue to be studied.